Vermont Harvest Folk Art by Doreen Frost
~Fine Needlework, Written Publications & Finished Goodes.~
Tucked in a valley, at the foot of Round Mountain, among the graceful Maples & Oaks you will find our Little Brown House. Smoke billows from the chimney seven or eight months out of the year, a river rambles nearby, sheep & cows graze in the meadows and turkey's forage along the olde stone walls.
~ GREETINGS. I AM SO HAPPY YOU'VE STOPPED BY.~

GOODE day my deare friends. Tis cool & sunny here in Vermont as August draws to a close and Autumn knocks on our door.  The heat and humidity, which seemed our constant summer companion has finally departed (hopefully for good) and cool lovely air has taken its place. Geese are already gathering in the fields (it is early this year.....)  stopping by for rest, as they make their way south, for the Winter.  Turkeys forage for acorns, and this year, seem to be accompanied, quite often, by bears as we've had so many sightings this year.  We believe the dry summer has brought them off the mountains and into the valleys, looking for food (and eating huge quantities of corn, straight from the stalks).  What a wonderful time of year.  I love the cool crisp mornings.  Even when the days were still hot and humid, the August mornings have been cool.  Just two days ago,  I stepped out onto the deck, coffee in hand, daylight still an hour off, and was greeted by an owl, who hooted so loudly and so closely that I jumped and spilled my coffee.  He, or she, must have been in one the treetops just off the deck.  Goodness, it startled me. :).

Anyway..now that I've written a book and not yet gotten to my reason for today's message....

First of all, I apologize for being so out of touch. I have been quite busy getting the September issue, of The Little Brown House Gazette, out the door.  It was a larger than usual issue and, believe it or not, shipped a week early!!!!  I am still amazed I was able to pull that off!!  In the midst of it all, my son fractured his pelvis in a four-wheeler accident.  So very scary!  Thankfully, he is beginning to feel better now.    Due to his accident, I have been helping take care of our grandson and,  helping with our son as well....SOOOO..my web show, which was originally scheduled for 08/18/2020,  was put on the back burner.  I was hoping to have been able to fit it in before August left us, however, it is just not possible SO, I have now rescheduled the show for Monday, September 7th at 4:00.  I hope you understand.

SPEAKING OF THE SEPTEMBER ISSUE....It has donned its traveling clothes (a first-class envelope and TWO stamps (it was a hefty issue this month) and began its trip around the world.  Tis a thick and lovely issue ~full of goode things and Autumn loveliness.  Another bonus ( the first one being it's a large issue) is that it shipped early!!!  It began its journey last week (August 21st to be exact) so it should be arriving at your doorstep any day now.  Please check back here, on the blog, on September 1st as I will have a Sourdough blog post to accompany the September issue.  Also, if you are not a subscriber, it is not too late ~ just pop on over to my website and subscribe.  Here's the link;  https://vermontharvestfolkart.com/collections/from-a-little-brown-house-gazette/products/from-a-little-brown-house-gazette.

I am off now to put a chicken in to roast.  Our daughter and son-in-law, along with their dear friends raised chickens this summer to harvest.  They....harvested...them a couple of weeks ago.  We'll be having mashed potatoes and glazed carrots as well ~ perfect on this first, cool evening in August.

Until next time my friends, wishing you health and happiness ~ Doreen 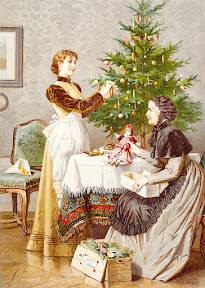 Our online group for stitchers and friends. Click on the photo to join. 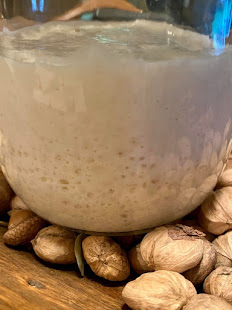 My top advice; Treat your starter like a living thing, because it is. Pay attention to your starter. Know its rises and falls. Pay attention to how it behaves and reacts to different room temperatures, flours, water temperature, etc. And finally; Read all you can, about Sourdough Bread Baking. I read books & blogs constantly and have also taken two online sourdough baking classes. There is a ton of great advice out there, you can find my favorites listed on my blog. 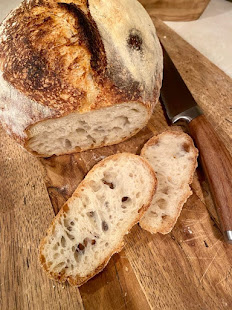 This is my favorite sourdough bread recipe. Click on the image for the recipe and how to.

I am SO happy to hear you are interested in joining me on this wonderful Sourdough Bread Baking Journey. There are lots of great websites, blogs, YouTube channels, tutorials and COOKBOOKS out there covering the subject of sourdough. It has grown tremendously in popularity, over the last few months, due to the quarantine which I think is wonderful. I have found this sourdough journey of mine very distracting in such a wonderful way. I am a home body anyway ~ so I guess you might say I had a leg up when it came to staying home and staying safe ~ however, it still had its challenges, changes, hardships and things to figure out. Sourdough gave me a busy and comforting distraction to focus on and truly ~ it helped me settle into all of this. I credit my wool applique to part of this as well and am quite sure it was an equal combination of the two. Baking & stitching = peace of mind in my opinion.

You will want to sift through all the info out there and find what clicks for you however, I will share with you the things (websites, blogs, Instagram and cookbooks) that worked for me and helped to finally, make this sourdough journey work for me. **Of note..I will be posting my journey with tips, tricks and notes on exactly what I did soon** In the meantime, these links are where I started. :)

I believe my success was a combination of all of the links below however, if I had to choose a starting place, to suggest to someone just getting into the "business of sourdough," it would be the wonderful cookbook I've listed below.

COOKBOOK; Artisan Bread Made Simple by Emilie Raff ~ oh this book is gorgeous. The hard copies are currently sold out right now which is completely understandable, considering how amazing it is (OH THE RECIPES and gorgeous photo's in this book). HOWEVER, you can purchase the digital version, which is what I did, via iBook's, Kindle, etc. :). You can also find Emilie's recipes on her website; The Clever Carrot.https://www.theclevercarrot.com/cookbooks/

ONLINE CLASS ~ Gartar Stitch Farm. This is what got me started on this journey, once again, so it was a huge help in my success. Kat's very laid back so her approach is great. She has an online class that you can pay for or you can follow her instagram and follow along with her free "recipe stories"
https://garturstitchfarmshop.com/collections/shop-1-online-courses/products/everyday-sourghdough-the-online-course-level-one

SOURDOUGH UNIVERSITY ~ This is tremendously helpful in many ways. Mike is funny and down to earth and breaks things down in a real and manageable way. He also gives fantastic sample schedules for making a loaf of bread which was a huge plus and SO HELFUL. He is also great in helping to figure out all of the math and science behind sourdough. There is a rhythm and timing to this life being called sourdough starter and though it is not difficult, like anything else, there are do's and don'ts and keys to success. https://sourdough-u.teachable.com/

KING ARTHUR FLOUR ~ Sourdough Baking, The Complete Guide. KAF is #1 is all things flour and their starter recipes, schedule and recipes are fantastic!!! You can't go wrong! https://www.kingarthurflour.com/learn/guides/sourdough

WEBSITES; These are my two of my favorites;

AMY DUSKA OF Little Spoon Farm ~ Another wonderful starter tutorial, schedule and recipes. Amy would be my 2nd choice for a beginner :).https://littlespoonfarm.com/

MOLLY SHEPARD of withmolly.com. Another person that breaks things down simply with an easy to follow tutorial and great recipes..including discard recipes which I find essential as I do not care to throw away my discard after feeding my starter. :). https://withmolly.com/tag/bread-basics/

FOOD52 ~ Like KAF, you can not go wrong with Food52!!! I've not gone through their sourdough tutorial but it comes with a great recommendation from Dianne Yvon :). https://withmolly.com/tag/bread-basics/

I believe that is everything. I hope you'll join in on this fun journey ~ you will LOVE it. Keep me posted and share your journey. 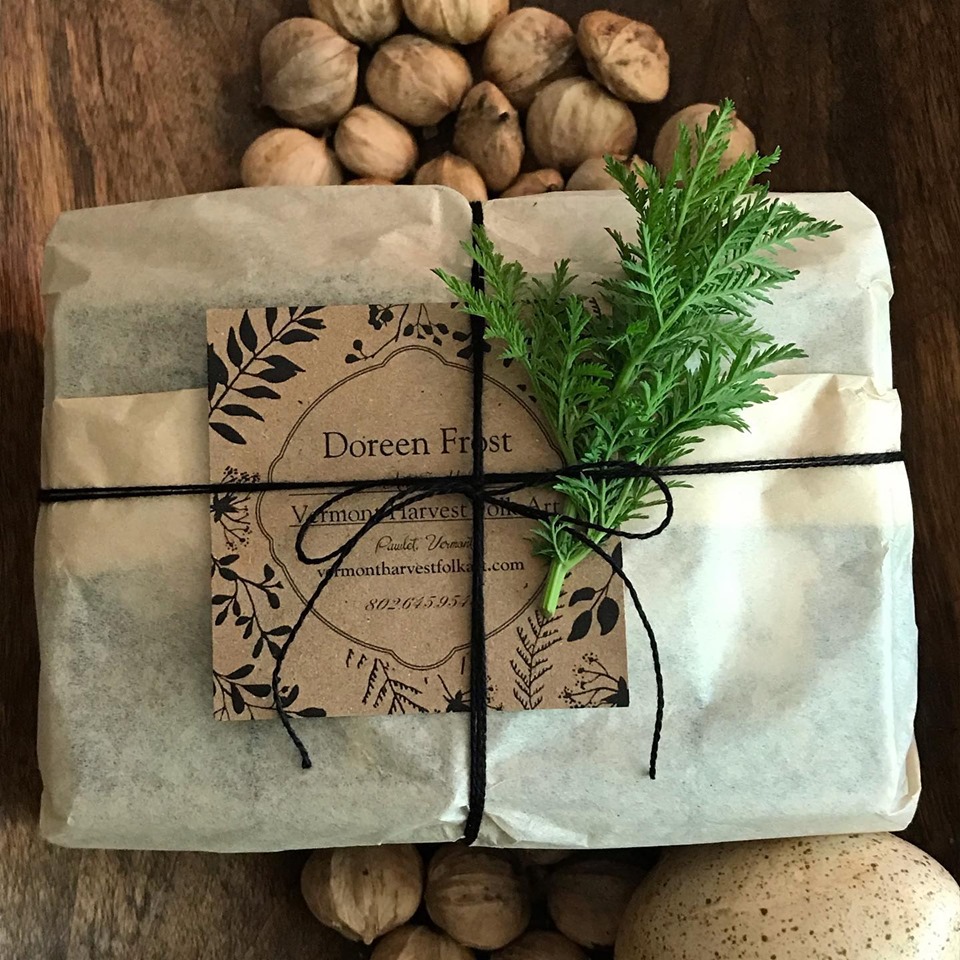 I strive to put love and creativeness into everything I do...even my packaging

IN THE 1860's....a tin peddler named Edward FROST began designing patterns and printing them onto burlap to sell to housewives. Later, patterns began to appear, through mail order, in The Montgomery Ward catelog. 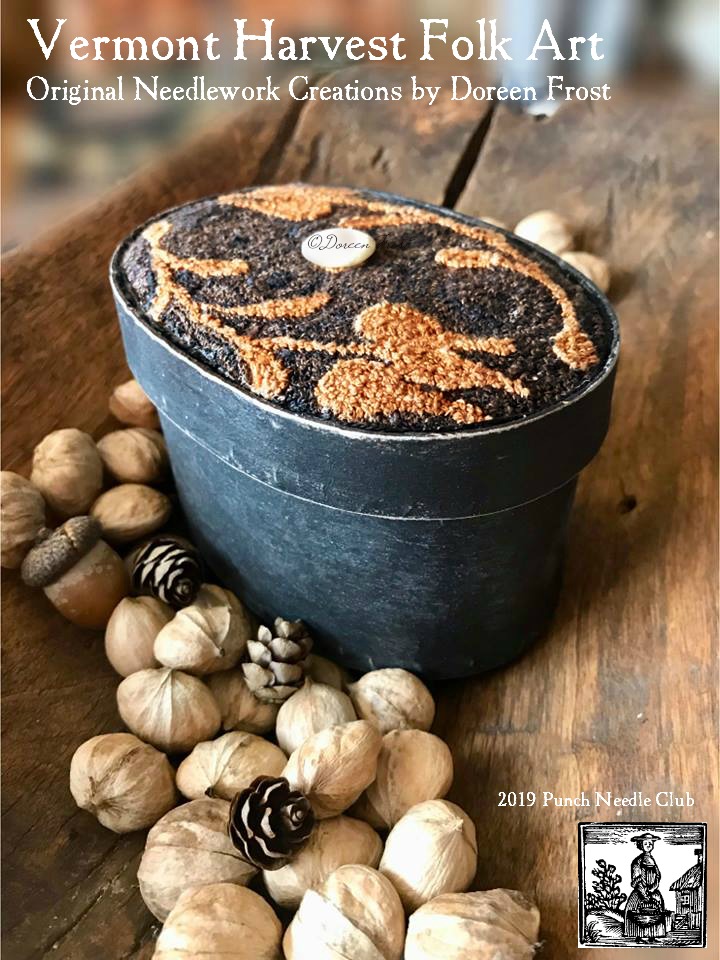 Miniature punch needle embroidery has been around for a very long time. Ancient Egyptians were among the first to employ this technique by using the hollow bones of birds' wings as needles. Punch needle emboidery is often referred to as "Thread Painting" due to the lovely intricate, artistic designs you are able to create.

I am an optimist, it doesn’t seem too much use being anything else.” ~ Winston Churchill

~What I'm Working On~ 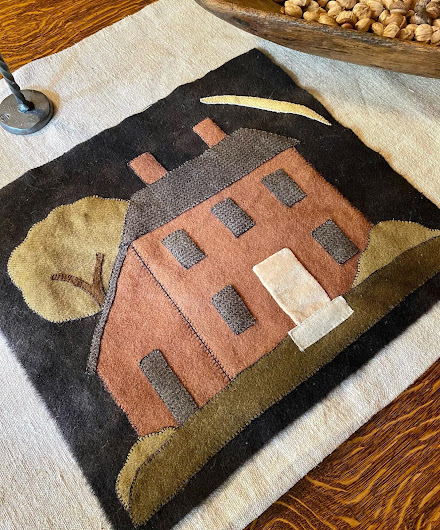